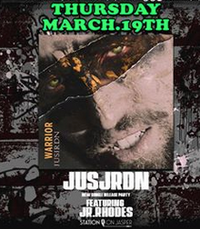 I am honoured to be playing keys on this night for JusJrdn! Please support local hip-hop artist - this will be a night of high energy along with chill vibes! You won't want to miss out on this show! More information below! "JusJrdn featuring Jr. Rhodes (Brandon D'souza ) and Brandon Quach on the 1's and 2's" Doors: 8:00 P.M. Show: 9:00 P.M.

A soldier returns to the battlefield. Edmonton hip hop survivor JusJrdn releases new single “Warrior” and is back to conquer the stage. From the darkness comes redemption. From the depths of depression comes the new energy of artistic expression unrestrained. JusJrdn’s new single “Warrior” broke on February 21, 2020 and it has marked the rebirth of one of Edmonton’s most promising musical talents. With an ambitious goal of performing 100 concerts across Canada. It starts with one. On March 19th, JusJrdn returns to the stage for the first time this decade. His goal is first to sell out The Station on Jasper, with aid from local artist Jr. Rhodes.

JusJrdn will be bringing an amazingly emotional and impactful performance, along with an album of new tracks. This will be the first time people will get a chance to hear brand new songs from the highly anticipated “OLYMPUS” album, set to drop mid 2020.

Jr. Rhodes (JR.) is an artist/producer born and raised in Edmonton, Alberta. He emerged into the scene with his hit single “Shoot!”, which released in May 2019. Since then, JR. has dropped several singles including his debut project “Innermission”, which released December 6, 2019. This Canadian artist is slowly growing his way into the already blooming Canadian Music scene, and is someone to keep an eye on if you’re a Hip-Hop fan.